Hello Sweet Tooth Saturday fans! Are you counting down the days until Ramadan yet? Today, we will be introducing the one and only, qatayef; it’s a Syrian dessert originally, but is now adored all over the Middle Eastern region, and has become a must-have treat during the month of Ramadan for many Muslims! It is made from pancake-like dough, and can be stuffed with ishta (cream), cheese, or nuts, and it can be either fried and topped with syrup, or simply made in the way the recipe below suggests. Since Ramadan is coming up, this popular treat is sure to be a favorite, and we are sharing the original version!

Thanks to Alia of Syrian Eats, @syrianeats, a Syrian-American born and raised in Tulsa, Oklahoma, we have added this to our Ramadan list of sweets! Alia’s recipe is as Syrian as her beautiful family. She says her cooking is inspired from both her mother and mother-in-law. Although they are both from Syria, they have varying cooking styles since her mother-in-law is from Aleppo and Alia’s own family is from Damascus. It never ceases to amaze me how cooking can vary so much from regions and cities even if the people are from the same country! Alia’s cooking is a combination of the two mothers’ styles mixed with her own. Her style is essentially Syrian-American, so it’s a mix of both worlds since she grew up in the U.S.

Alia has been cooking from a young age when she would dabble in the kitchen with her mom, and then even more after marriage. Her family loves her cooking so much that they encouraged her to start a channel on YouTube. She took their advice, and officially created her platform, called Syrian Eats, which can be found on YouTube, Facebook, and Instagram. Although Syrian Eats is only a year old since its commencement in January 2019, Alia has proved her dedicated talent through many videos, and over a hundred Instagram posts!

Alia has shared the sad reality of the political unrest that Syria experienced after the recent war began. Millions of individuals and families fled to different countries around the world. In an effort to preserve her cultural and ethnic culinary roots, her purpose and goal is to share and create the traditional meals that were cooked at home with the rest of the world through her social media platforms. Alongside her traditional roots, she likes to share her twists on American food creations as well. As she mentions, “I wanted second-generation people that don’t speak the language, or didn’t learn from their mothers, or even Syrians in college, to still be able to make a traditional meal at home.” For these reasons, she also adds Arabic subtitles to each video.

She hopes one day to create a Syrian-inspired cookbook filled with her yummy recipes. This will be a great effort to preserve her family’s best-kept recipe secrets, and traditional Syrian cooking as well, especially for the younger generations. What a thoughtful and altruistic endeavor!

Of Royalty and Ramadan

Qatayef or “atayef” is originally from the city of Damascus. This dessert was traditionally only made during the month of Ramadan and Eid. Qatayef acutallly means “picking” or “taking” in Arabic.

The first time qatayef was ever eaten was in the Umayyad era of Islamic history. The Caliph Sulayman bin Abd al-Malik al-Umayyad (the seventh Ummayad ruler) was the first to eat qatayef sweets in the month of Ramadan in 98 Hijri year.

There are varying accounts in regards to its origin, as other sources suggest it was also referred to in the Fatimid era. As the story goes, a competition arose where dessert makers and/or bakers competed to present their best sweets to the Caliph or Sultan in order to gain his satisfaction, admiration, and work in his palace.

One of the chefs decided to invent a small pancake-like dough, stuffed with nuts or cream (ishta in Arabic), then placed it neatly in a dish and decorated it with nuts. He presented his invention to the guests in the royal palace on a beautiful tray. After a bite, the guests kept rushing to him and picking out more from the tray. The baker named it “qatayef,” accordingly, and it has been popular ever since!

Alia says she wouldn’t be bustling in the kitchen for her passion, and sharing it to the world if it wasn’t for God’s will. She is grateful for her family and husband who keep the kids busy while she works, and for her subscribers and/or followers who are entranced by her creations. With three kids, she says keeping up with creating new video recipes (which includes recording, editing, and adding subtitles all by herself) for YouTube, maintaining a beautiful Instagram grid, and providing interesting Facebook updates, is like having a full-time job! Believe me, Alia, we agree with you on that! And if I can say so myself, I would even say it is like having two full-time jobs since motherhood is a full-time hustle in itself!

So without further ado, here is the ever-popular recipe that can be created in the comfort of your home! 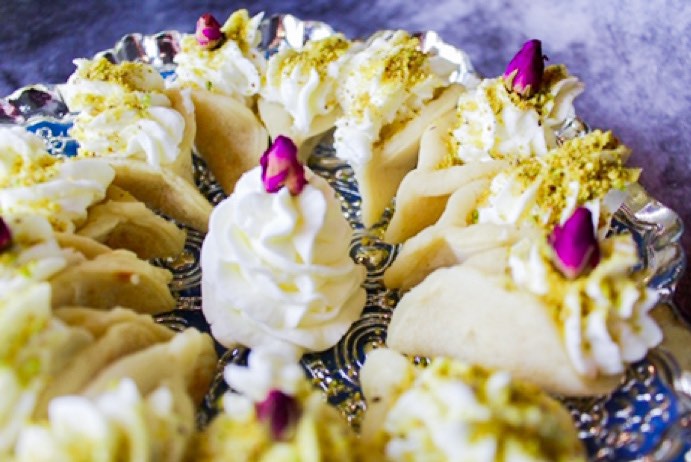 You can also follow along with Alia as she makes these delicacies by watching the video below!

We really look forward to stocking our pantry with these ingredients, and trying the historically glorious “Atayef Asafeery” for ourselves! Thank you Alia for sharing this timeless Middle-Eastern classic with us! Please check out Alia’s mesmerizing recipes on Facebook, Instagram, and YouTube, under the name of Syrian Eats or @SyrianEats.

Aisha Khalfay is a sassy and classy young mom who grew up in both the U.S. and Canada. She received a double major in Psychology and Political Science from McMaster University in Canada. She finds that her travels have positively refined her life and her perspective on the world. In 2014, her life was forever changed when she had her first child–a daughter! She has wanted to focus her career on children ever since. Currently, she is working on a mini children’s fantasy book series that instills faith-based morals and values on its young readers. In the future, she hopes to become a child psychologist and/or counselor. She also has a knack for transitional decor, adores modest fashion, making her kids laugh, and a strong cup of tea. Aisha happily lives in the active city of Denver, Colorado with her bookwormy five-year old daughter, sporty three-year old son, and doting husband.