Since its start in 2010, Haute Hijab has been on one mission: to meet the needs and wants of hijab-wearing Muslim women around the world so that they feel more empowered, comfortable, and confident than ever before in their hijabs.

With each collection they have launched, featuring high-quality materials, meticulous craftsmanship and designs, and the most innovative and cutting-edge technology, they have successfully overachieved their goals. And they have also proven more and more deserving of branding themselves as the “World’s best hijabs for the world’s most powerful women.” They aren’t lying.

On their website, they also state, “It’s not enough for us to make good hijabs; we’re determined to make the hijabs you always wished you had–or the ones you never imagined were possible.”

And their new sports collection truly speaks to that statement. It shows how Haute Hijab doesn’t just talk the talk, but they actually walk the walk in creating amazing products that actually meet our demands and even exceed our expectations.

Haute Hijab Sport isn’t just good. It’s great. And it’s truly unlike anything else currently on the market. After almost two years of extensive research, advanced design, and product testing with various hijabi athletes, they brought us a collection of four high-performance, sleekly-styled sport hijabs to suit a variety of needs, tastes, and activities including the Criss-Cross Sport Hijab, the FlexFit Sport Hijab, the Tech Sport Cap, and the Tech Sport Wrap. Shop them below.

These athletic hijabs are all created from S. Cafe, which is a groundbreaking and sustainable tech fabric that uses recycled coffee grounds to create a lightweight, fast-drying, sweat-wicking, and odor-resistant fabric that also offers UV protection. This revolutionary textile is also proven to lower body temperature by 1 or 2 degrees Celsius, offering a cool and airy sensation during your workouts.

This collection is about more than its stylish and innovative products. It’s a movement. Along with the release of their sports line, Haute Hijab launched its “Can’t Ban Us” campaign, which is making a statement that is even louder and bolder than these fierce hijabs.

For years, Muslim women have been ignored and underserved in sports due to their hijabs. As Melanie Elturk described in her letter, hijabi athletes have been banned from playing sports professionally and have been disqualified for wearing hijab even in school sports, like Bilqis Abdul-Qaadir and Noor Alexandria Abukaram, who are the faces of the campaign. However, these unfair, discriminatory rules didn’t stop them; they only made them fight back harder.

Bilqis was a top ranked basketball player in both high school and college. She decided to play internationally when she didn’t make it in the WNBA in 2014. However, since the International Basketball Federation (FIBA) didn’t allow any kind of headgear, including hijab, she was banned from playing. She didn’t back down, and was determined to fight for change. She joined the #FIBAAllowHijab campaign, and the federation finally changed its rules to allow headgear in international competition a few years later in 2017.

However, by that time, Bilqis had already moved on career-wise as an athletic director and athletic activist, and is heavily involved in speaking engagements, hosting basketball camps and clinics, and managing Dribbling Down Barriers, a sports development program she started with her husband. Her decision not to play stemmed from her feeling that she would continue to have a greater impact off of the court than on it.

Similarly, Noor Abukaram is a cross country runner who was disqualified during her record breaking cross country race by the Ohio High School Athletic Association due to her hijab. But with that disappointment, came great determination to fight the prejudice she faced.

She launched the #LetNoorRun initiative, where she pushed to end discrimination in sports, and invited other athletes to share their experiences and struggles, and offer support to one another. Her initiative became a movement for Muslim athletes around the world, which led a bill to be passed in Ohio that prohibits schools and interscholastic organizations from banning any type of religious apparel during athletic events. 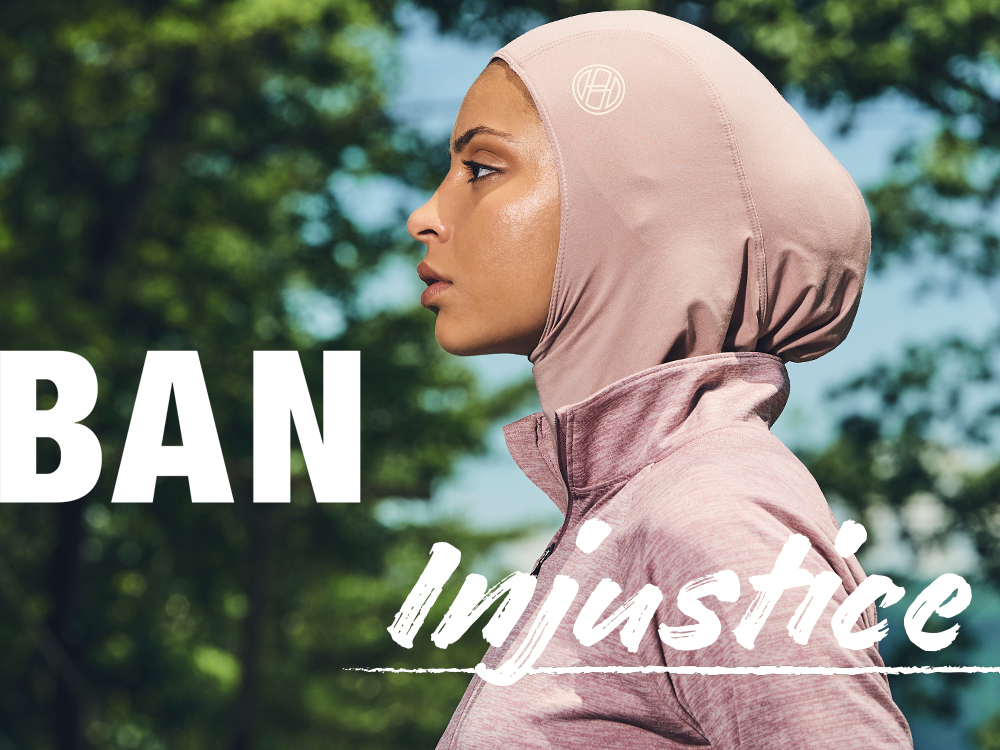 These strong and inspirational women, who have gained much recognition through their success stories, are changing the narrative–a narrative which has falsely characterized Muslim women as nonathletic, and disinterested in sports altogether. This narrative is partly to blame for the lack of genuine inclusion Muslimahs have faced in athletics and athleticwear.

Even popular brands like Nike, Adidas, and Under Armour who saw the financial potential of tapping into the Muslim consumer market failed to get it right because their products are more profit-oriented than consumer-driven. So, despite their products being geared towards them, Muslim women were still left out of the conversation and research about what they need as athletes, or women simply wanting to stay fit.

But not anymore. With their campaign, Haute Hijab is putting Muslim women at the forefront of this conversation. This brand recognizes and respects our diversity, and pledges to provide products that reflect that, rather than “the one-size-fits-all” offering of many other brands. As Elturk said, “No more makeshifts. No more compromises. No more settling.”

This movement truly represents the strength, skill, determination, and resilience Muslim women have to defy boundaries, break barriers, and fight for their rights through and through.

Muslim women are often pressured to choose between their faith and their passions, but with empowering brands like Haute Hijab creating effective products that help transform our experiences, and their continued contribution toward revolutionary change, we’ll be less likely to have to.

Join the #CantBanUs movement to continue to fight for our right to exist as we are. And instead of allowing ourselves and our religious practices to be banned, let’s come together as a community to ban things like racism, discrimination, injustice, and perfection.

If you could ban one thing, what would it be?

1. Criss-Cross Sport Hijab, $65
Sleek, feather-light pull-on style hijab with a cross-front band that frames the face, and a banded neck that keeps it in place and out of the way even during high-intensity workouts. 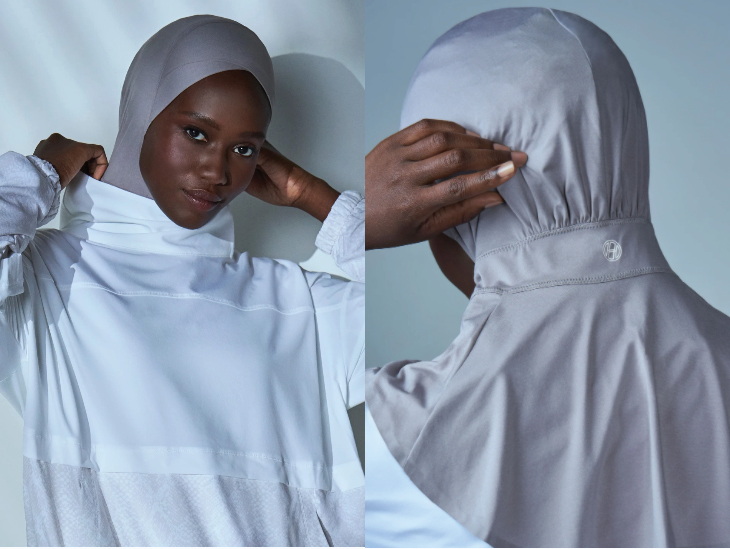 Plus-on style with an adjustable interior drawcord that allows you to tighten or loosen to your liking and comfort. 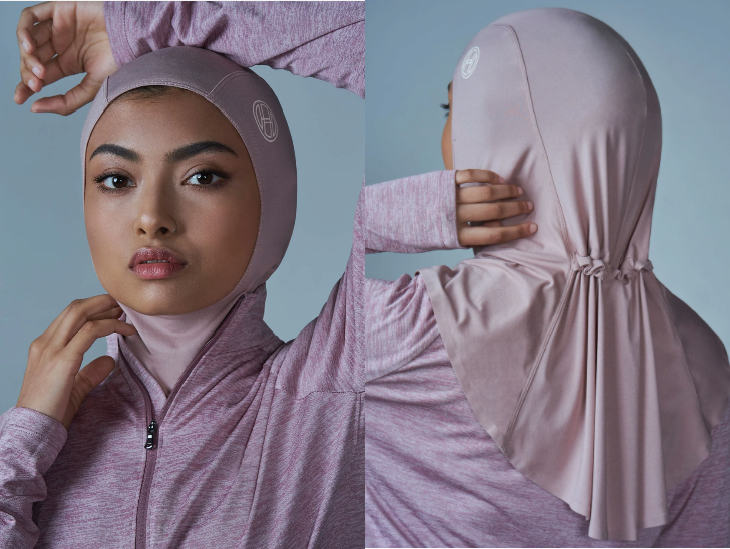 Ultra versatile and budge-proof undercap made with the same groundbreaking technology as every other sport hijab in this collection. It offers superior comfort and an incomparable fit with its elastic and back-gathering design that contours every curve. It can be worn on its own, under any hood or hijab, or paired with their Tech Sport Wrap. 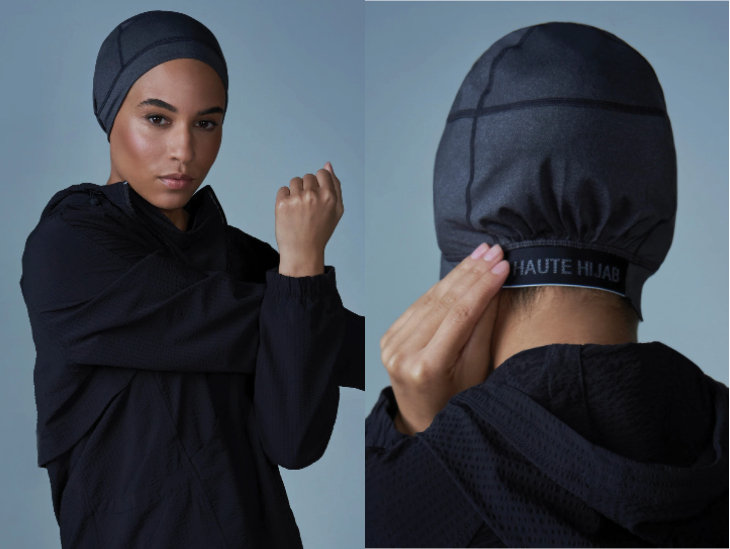 Versatile and perfectly-sized wrap with ultra light-weight, stretchy fabric that makes it feel weightless and is easy to style a number of ways. This functional and super comfortable hijab can be worn not only for working out, but for more casual and everyday wear, too. It can also be worn on its own or paired with their Tech Sport Cap.

Founder and editor of AM Women Magazine, Ayah Shaheen always had a passion for writing and reading magazines. She graduated with a BA in Journalism and a minor in graphic design, and it was during her time in college that her journey with AM Women began. Having had such a difficult time navigating through life as a Palestinian American Muslim, she saw the need for a resource that would provide guidance for women like her. Although she always imagined herself working for a popular editorial publication, the lack of representation and her inability to connect with the branding and content of existing magazines motivated her to create her own. By creating this online platform, Ayah is living out her dream of helping American Muslim women live their best lives one article and story at a time. When she is not busy plugging away on her laptop, you can find her either spending time with family and friends or rummaging through racks at her favorite clothing stores. She’s a lover of all things fashion, beauty, Oreo, crab rangoon, and she has a Gilmore Girls kind of obsession with coffee.