Today is the last day of Black History Month, but that doesn’t mean we should not continue to honor and respect the achievements made by Black Americans, share their stories, and amplify their voices throughout the rest of the year.

In light of that, we are highlighting the voices of a few of our fellow Black Muslim sisters with the hopes of shedding light on their realities and the changes we need to make as Muslims and as women in our community. 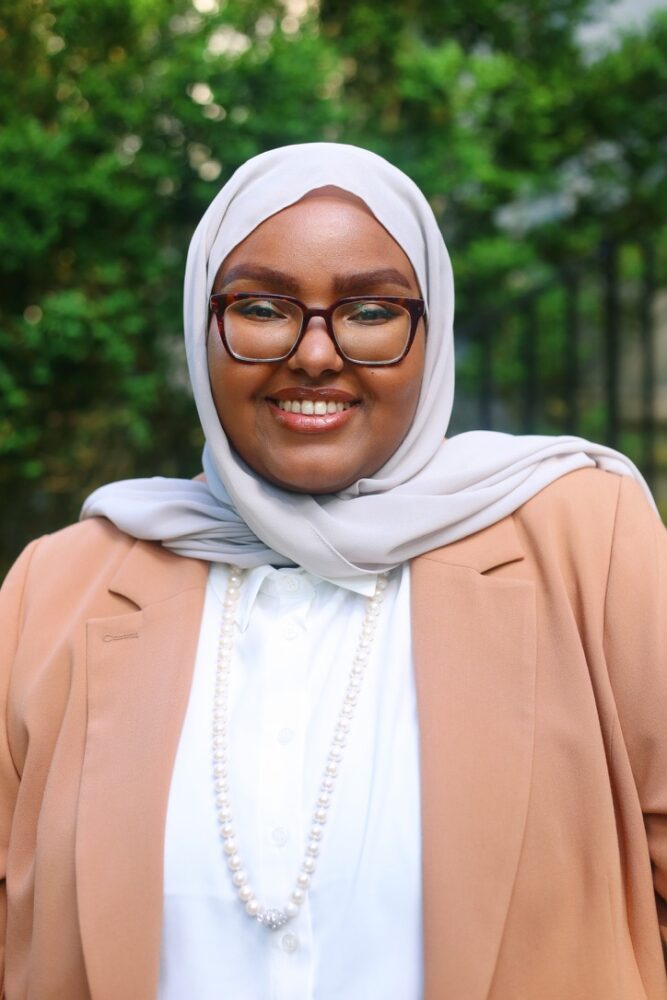 What has your experience been like as a Black Muslim woman?

My experience has been ever-changing, and will continue to be. For myself, living as a Black Muslim woman has been spending time to reflect and rest after years of fighting what others told me I am, and working to truly embrace who I am meant to be.

Accepting and celebrating my desire to lead while pushing back the narrative that stepping forward is a sign of aggression or a threat to others. Accepting and celebrating my desire to serve, and learning the power and honor in servitude for a greater purpose beyond the tropes of weakness or inferiority because I dare to be a Black and Muslim woman in service.

Black History Month means so much to me because I see it as a time to reset my intentions and evaluate those of others. In my line of work as an advocate for African survivors of domestic and sexual violence, we are working to break through layers upon layers of obstacles that are indisputably connected to the identities and experiences of our survivors.

As Black immigrant women survivors are our sole focus at TPC, our team depends on understanding the intentions of other service providers. We must ensure that their mission to end pervasive forms of violence is deeply rooted in liberation and restorative justice for all.

In a time dedicated to activism and learning, if the approach of those who our survivors turn to fails to recognize, let alone center their stories and realities, the harm that could occur against survivors of various trauma would be devastating. Our survivors need more than political grandstanding or reshares of diversity statements. We need conscious, equitable, and long-term action.

Action makes change, and change can save lives. It is about time we do two things at once, that we learn and we act, for the sake of the Black women and girls who are left with the weight of the world and without options.

The reality is that being an advocate, especially for survivors of violence linked to racist and exclusionist sociocultural and political structures, begins with reevaluating the actual degree of inclusion that you have in your own social circles. Failure to do so can result in tokenization, and further emotional and psychological harm on the very individuals you believe you properly support.

Being an advocate means being a long-time learner, and knowing that you will never be able to always get it right. Being an advocate means knowing that no matter your intentions, and no matter how much you hope to do the right thing, it is not the survivor’s role to placate your emotional need for validation. Who are you then truly advocating for? 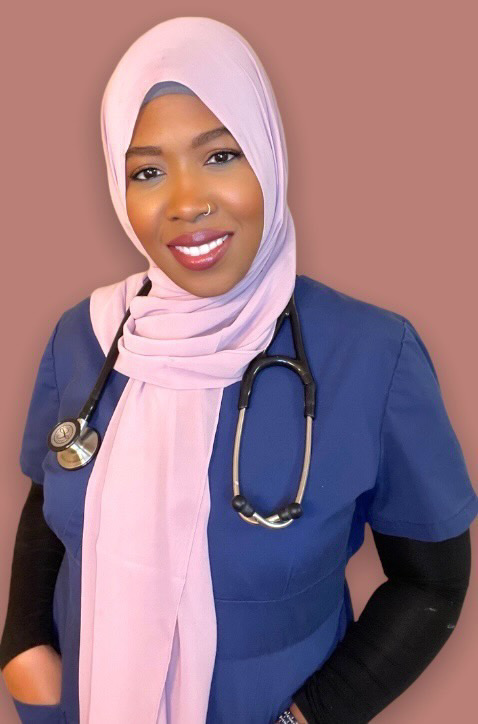 What has your experience been like as a Black Muslim Woman?

My experience has been mostly positive. For the majority of my life, I have been blessed to live in areas that are diverse. However, I have experienced racism in my career as a Black hijabi nurse who is often the only one like me. In addition, there are various levels of racism in the Muslim community. Many communities don’t acknowledge or respect our Black American experience and treat us like we are not Muslim enough. We definitely have work to do.

It’s a month that attempts to highlight Black history and all of our trials and triumphs, although Black history and American history are intertwined and really should be discussed all year round. But in the spirit of gratitude, we accept this month as an opportunity to celebrate Black excellence and joy.

They can take the initiative to educate themselves on our history, be present, and speak out against the injustices. As MLK said: “In the end, we will remember not the words of our enemies, but the silence of our friends.” They need to reflect on their biases and how they may perpetuate and contribute to systemic racism. Also, support Black Muslim leadership and give them a platform. Together we can stand united against oppression. 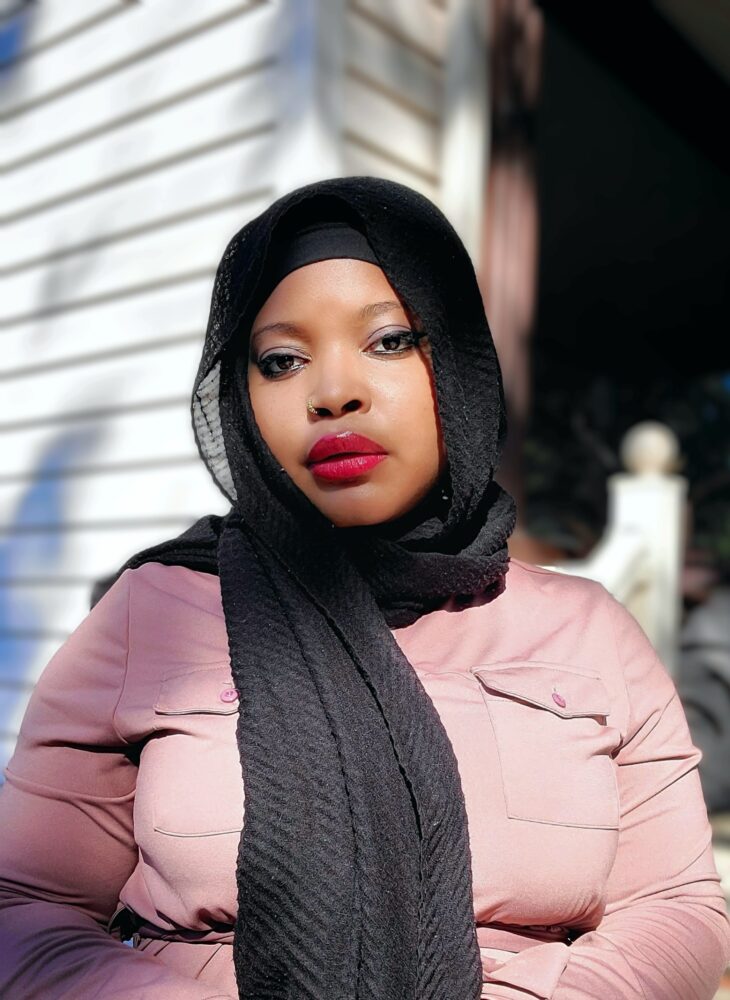 What has your experience been like as a Black Muslim Woman?

I love being a Black Muslim woman. It’s interesting and definitely not always easy. I think the most frustrating part is constantly being “othered” by both other Muslims and non-Muslims alike. I don’t know if I’ll ever not be a little irritated when a Muslim from another background asks me where I’m from “originally,” or assume that I am a convert/revert simply because I am Black.

I am reminded of the Charles Ball quote, “I knew several [people] who must have been, from what I have since learned, Mohamedans [Muslims]; though at that time, I had never heard of the religion of Mohamed. There was one man on this plantation…who prayed five times every day, always turning his face to the east, when in the performance of his devotion.” We’re not new to this. Black Muslims brought Islam to America, had it stripped away, and reclaimed it. Subhanallah.

And then there are the non-Muslims who assume I’m Middle Eastern or Bengali. When I was in college, my middle-aged Art 101 teacher asked if he could draw me because I was “so exotic.” He never missed an opportunity to remind me of how exotic he thought I was. When I worked in retail, I had customers speak to me as if I was directly responsible for 9/11, and I’ve had customers compliment me on my good English. Yeah, it’s definitely been interesting.

Now, as an adult, every year BHM is a wonderful time for me to be exposed to an abundance of information, both historical and current about my people. And while I don’t wait until February to educate myself, I find that I always learn something new, fascinating, and empowering every Black History Month. The feeling of connectedness, love, and support is unmatched.

One very important way that I think others can advocate for Black Muslims is to invite them/us to speak. As far as I’m concerned, there shouldn’t be any conversations, campaigns, or movements regarding Muslims/Islam in America that does not have a Black Muslim voice (or several voices) present.

Another thing others must do if they intend to be our advocates is to educate themselves on the history of Blackness in America, as well as the current anti-Black structures and institutions that still exist today. We are Muslim AND Black and the two cannot be separated. 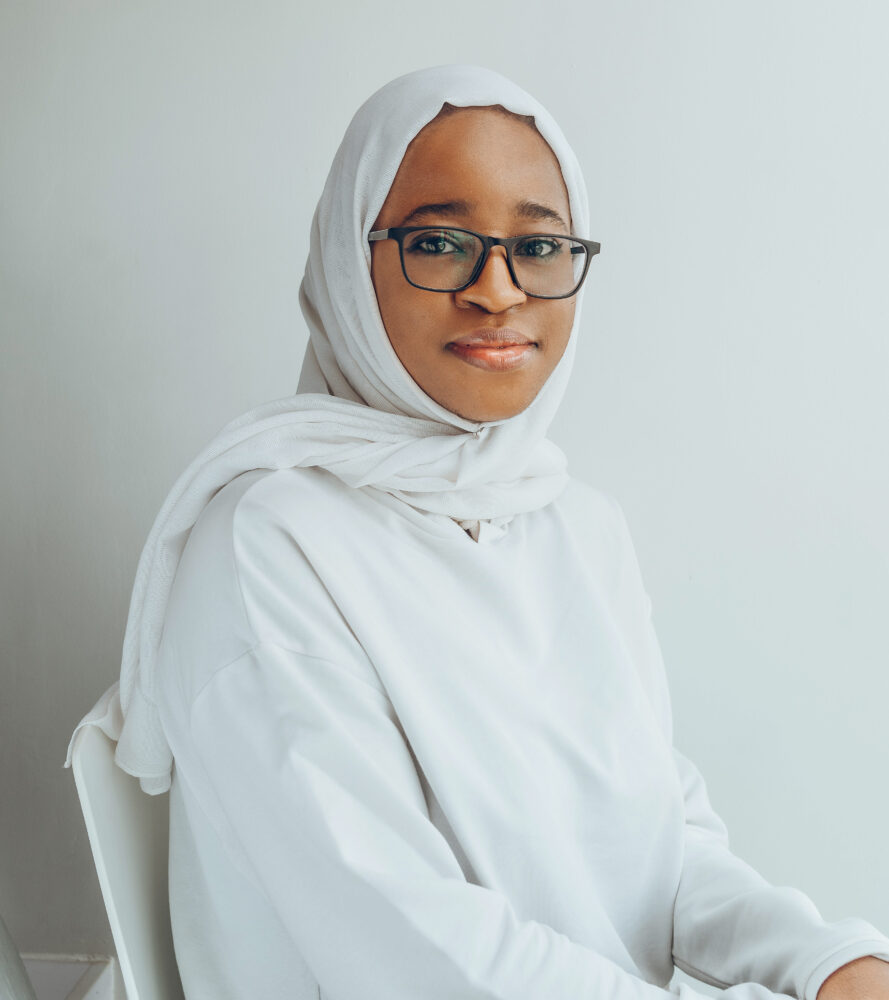 What has your experience been like as a Black Muslim woman?

As a young teenage girl, I occasionally saw news reports on racism, micro-aggression, but had never experienced it. I grew up in my home country, Nigeria, where being a Black Muslim woman wasn’t alien.

At 17, I had to further my studies abroad, and for the first time, I was exposed to the world’s view of ‘Black and White.’ I experienced racism, micro-aggression, discrimination, and so on.

I became conscious of my skin and watched my young teenage self slowly drown in society’s swamp– a dark place where everyone looked down at me. I was diagnosed with Social Anxiety Disorder (SAD), and I slowly lost my identity. I hated myself and I became uncomfortable in my skin. What if I was a little bit different?, I often wondered.

Ever since then, it’s been a constant struggle to get through the world. Everyday, I wake up challenging a system that undermines me as a Black Muslim woman. Everyday, I fight for my basic human right, for opportunities, and for a chance to just be human. Everyday, I wonder, “Who would I be if the world never gave me a label?” Black. Muslim. Woman.

As cliche as this may sound, Black History Month means the world to me. I became aware of BHM in 2016, reading different articles celebrating Black people– our culture, history and being.

And sometimes, I don’t think people understand how powerful it is to be bombarded with content that highlights Black people, especially since we don’t see much of this in the mainstream media. It’s so beautiful that every February and October, I don’t just get to learn a lot more about Black history, but also get to see more representation in the media.

I am not sure what the right answer to this question is. Many of the challenges we face as Black people are very systemic, but as I always say, individuals make up a system.

Sometimes as humans, we tend to harbor certain biases, and these intrinsic biases end up surfacing when we relate with people (thus leading to racism, micro-aggression, etc). The first thing we need to do as a society is to unlearn and detach from the media stereotypes of Black Muslims.

As a people, we don’t seek any form of special attention, especially not the tokenistic gestures of certain organizations. We just want to be treated as humans and I believe that equality and inclusion can be achieved, if and only if, we see every individual as just human.

How about we strip off the labels society has placed on people? So now, I am throwing back the question to the reader, “How do you advocate for Black Muslims?”

We end this month leaving you with this powerful question, and now it’s up to you to reflect on it, and decide what difference you will make each and every day moving forward. What everyday changes will you make to break these stereotypes and barriers, and be more inclusive whether it’s at work, at home, or when you’re with family and friends?

Whether it’s in the conversations you have, the businesses you support, the people you make an effort to know, have relationships with, and treat with equality and respect, there are small things you can do every day that can have a huge impact on yourself, others, and the community at large to move in a more truly equal and inclusive direction.

Can you relate to the experiences of any of these women? How do you think others can advocate for Black Muslims? Let us know in the comments below!

Cailey is currently a student studying English with a concentration in Literature. She has always had a passion for reading, writing, fashion and social media, so she was extremely excited when she received this internship opportunity, as it combines all her interests into one. In her free time, Cailey enjoys running, making coffee, reading, and trying new foods.